In Barcelona, we ate ourselves silly on paella. My mission while in Spain was to try as many versions as I could. That, and drink lots of Rioja, Cava, and Rosé. My mission when we returned home, was to set myself to making what I consider in my book to be the “perfect Seafood Paella.”

How to Make the Best Paella:

I knew that I wanted my Seafood Paella recipe to have these things going on:

But first, I needed a paella pan. I’d considered buying one in Barcelona, but that would mean lugging it home with us. With two suitcases already stuffed with local Rioja from our wine tasting trip, I decided it would make more sense to just purchase one back at home. I ended up buying this one and it served its purpose well.

A paella pan is a LARGE pan with a flat bottom, and it’s pretty shallow. You’re going to be doing every thing in this pan – Starting with browning the sausage and chicken, then adding your aromatics, and then pouring in the rice, allowing it to cook all together. Paella is the original one-pot meal! If you’re in a bind, and don’t have a paella pan, it is possible to make this dish in a large skillet, but I would definitely cut the recipe in half. Otherwise, your pan is going to be overflowing. Trust me on this one. 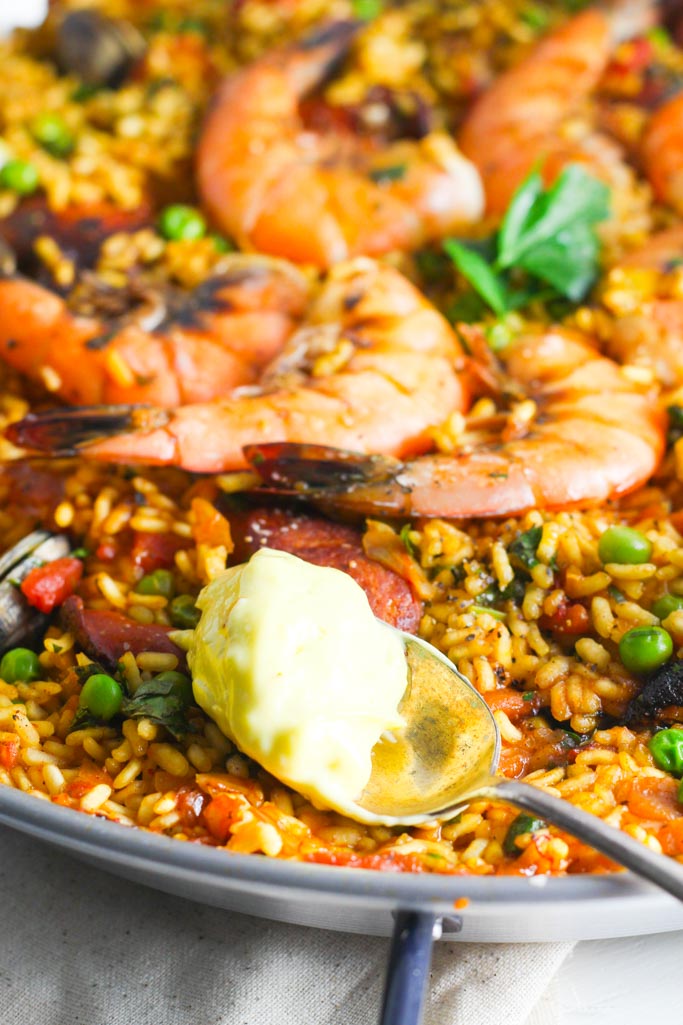 I also picked up some authentic Spanish paprika. You want it to be fresh and high-quality. The same holds true for your rice. I used Arborio rice in this recipe, an Italian rice, named after the town of Arborio in the Po River Valley, where it is grown. It’s the same rice that you would make risotto with. Like a risotto, when cooked, the rounded grains are firm, creamy, and chewy. They also soak up the flavors of the dish wonderfully.

To get that bold saffron backbone, I heated the broth with a pinch of the saffron threads. Yes, saffron can be expensive, but a little goes a long way. If your grocery store has a bulk spices section, be sure to look for it there, and just grab what you need. It’s much more economical that way, plus you can be sure that it’s fresh.

As to the protein, I knew that I wanted a good combination of the freshest ingredients going on. So, I set off for the market to see what was looking its best. Right off, I grabbed some shrimp. These are the big boys – Like you eat two and you’re full. I also picked up some fresh local clams, a few spicy chorizo links, and some boneless, skinless chicken thighs.

Really, you can throw whatever you’d like into this paella. Check out your local grocery store and see what’s looking good that day. Instead of the shrimp, maybe throw in a couple lobster tails. Mussels more your thing? Swap out the clams. Not into spicy dishes? Sub in some kielbasa for the chorizo. This is a totally customizable dish. And, don’t worry too much about the proportions of the meat either. Shoot for  a total of three pounds meat/seafood to fill the pan nicely.

You will want to brown the meats in the pan ahead of time, to ensure that they cook thoroughly. They don’t have to be cooked all the way, just give them a good sear. They’ll continue to cook in the rice mixture. However, with the seafood, you don’t want to add that until later, so that it doesn’t get overcooked. Bury your shrimp, clams, etc. in the rice and allow it to cook slowly as the rice finishes cooking. You’ll know they’re done when the shrimp turn pink and the clams open.

Be sure not to miss the final step in this recipe – Turn up the heat for the last 40 seconds. That short bit of time is what’s going to give you that crispy rice on the bottom. It’s THE SECOND BEST part of the dish.

The BEST part of this dish? The thing that knocks this paella out of the park? The Saffron Aioli. Let’s just try to eke a bit more saffron into this dish, shall we? Plus… garlic, and creamy, and yummy. 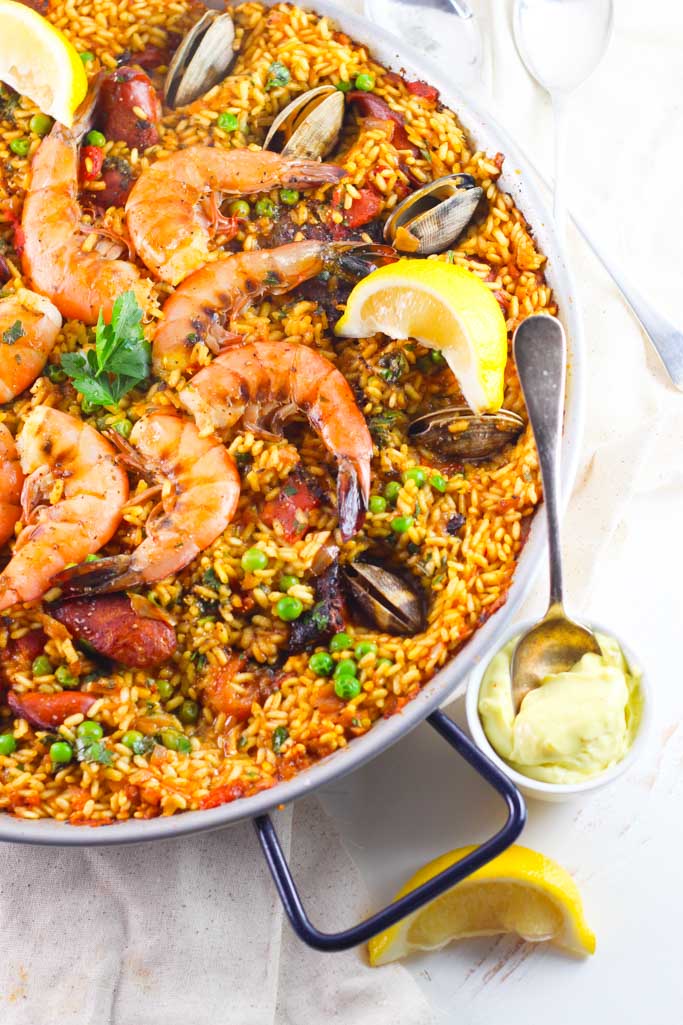 My first attempt at this aioli was an epic fail. But, I was NOT going to be eating my paella without it. I was making this aioli – grrr! At least I was going to give it one more try…

So, let me teach you from my mistakes. Add in the olive oil SLOWLY. Like really, REALLY, really, really, slowly. Don’t add it in a slow stream. Add it drop, by drop, by drop, until the mixture starts to combine together and become creamy. At that point (and only at that point), you can increase the addition of the oil to a thin stream. Continue whisking together until all of the oil is incorporated. What you’ve essentially made is a mayonnaise. But this is different. This is a Saffron Aioli. And, even if you don’t like mayonnaise, you will like this. I promise.

I’m expecting that we’ll be making it often on the weekends that we spend at our beach house. Especially, when it’s a perfect low tide and we can get the clams ourselves. Time to invest in a second paella pan!

If you loved this Seafood Paella recipe I would appreciate it so much if you would give it a star review! Also, be sure to snap a picture of your finished dish and share it with me on Instagram using the hashtag #platingsandpairings and tagging me @platingsandpairings. 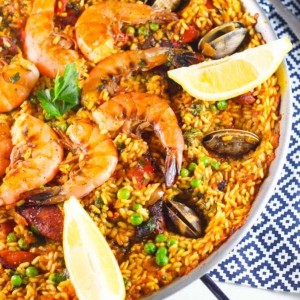