Turkey Picadillo is a lightened up version of the traditional Latin American dish made with ground beef. Serve it over rice or as a taco filling and enjoy!

This recipe for turkey picadillo was inspired by a segment about Puerto Rican cooking on my favorite radio show, The Splendid Table.

Have you listened to The Splendid Table? LOVE! It’s a radio show about all things cooking, and eating, and a bit of travel while eating. Highly recommend. The last episode I listened to featured a woman named Von Diaz, who was born in Puerto Rico, but moved to Atlanta with her family when she was 5 years old. Diaz spoke about the amazing foods that her mother and grandmother would prepare growing up. Her mom being a bit more of a heath nut, and her grandmother cooking much more in the traditional style.

One of the classic dishes that Diaz grew up with, and now makes very often herself, is picadillo, a dish of ground meat that is seasoned with sofrito, olives and raisins. While the traditional version is cooked with beef, her mother would make a healthier version with ground turkey. In their household, the picadillo would always be on hand in a little container in the fridge, much like Americans would keep lunch meat.

I was intrigued. I pictured myself making this dish, eating a bit and stashing it away in the fridge, and snacking on it on a daily basis, while cold, and then making it again and again, week after week, and becoming a little Irish-Italian girl who always has turkey picadillo on hand.

So, I started googling recipes for picadillo and found that there are SO many different versions. It was a bit overwhelming. So I put into perspective what I wanted in my version of turkey picadillo.

First, I knew that I wanted to use turkey as my base. I like that it is lower in calories and saturated fat than ground beef. Plus, I prefer the lighter flavor of it.

Second, I found recipes that had some capers thrown into the mix. I’m a caper fiend… So I included those in my recipe.

Third, I wanted to use the traditional elements found in most picadillos – green olives, raisins, spices and tomatoes. I chose to add in cumin, because it’s one of my favorite spices. I also added in a bit of cinnamon to the mix, because I felt like it needed a bit more of a boost. (It worked!)

Fourth – Wine! I had to throw some wine into the mix for good measure. Because… You know… Wine.

How to Make Cuban Picadillo:

The result was amazing. Rich, salty, spicy, and a bit sweet thanks to those raisins. Those raisins…. They plump up so magically when they’re simmered in this mixture and absorb all of the wonderful flavors of the dish. They were one of my favorite parts of this turkey picadillo.

If you loved this turkey picadillo I would appreciate it so much if you would give this recipe a star review! Also, be sure to snap a picture of your finished dish and share it with me on Instagram using the hashtag #platingsandpairings and tagging me @platingsandpairings. 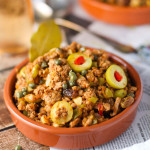 Turkey Picadillo is a lightened up version of the traditional Latin American dish made with ground beef. This sweet and savory mixture combines briny olives and capers, with sweet golden raisins, black beans and plenty of delicious spices. Serve it over rice or as a taco filling and enjoy!