Instant Pot Sous Vide Egg Bites are just like the ones you’d find at Starbucks. By making them at home in your electric pressure cooker, you’ll save lots of money and you can totally customize them with your favorite flavors.

A few weeks ago, I was dropping off my car to be serviced and I thought I’d stop in at Starbucks first to grab a Soy Latte and a bite to eat. My normal go-to at Starbucks is their Spinach & Feta Egg White Wrap, but I’d been hearing a lot about their sous vide egg bites lately, so I decided to give their Egg White & Red Pepper bites a try. I was hooked after the first bite. They were warm and creamy, and I couldn’t help but think that they must be super healthy too, since they’re basically carb free and packed with protein. But they were expensive too – Almost $5 for two tiny bites.

So, while I was waiting at the car dealership, I decided to browse the internet to search for how I could make those sous vide egg bites at home. I was extra excited when I saw that so many of the recipes used by beloved Instant Pot to make them. So, I instantly ordered this silicone mold for making the egg bites and waited patiently for two days until it was delivered by Amazon Prime. Then I set out to do some recipe testing of my own. 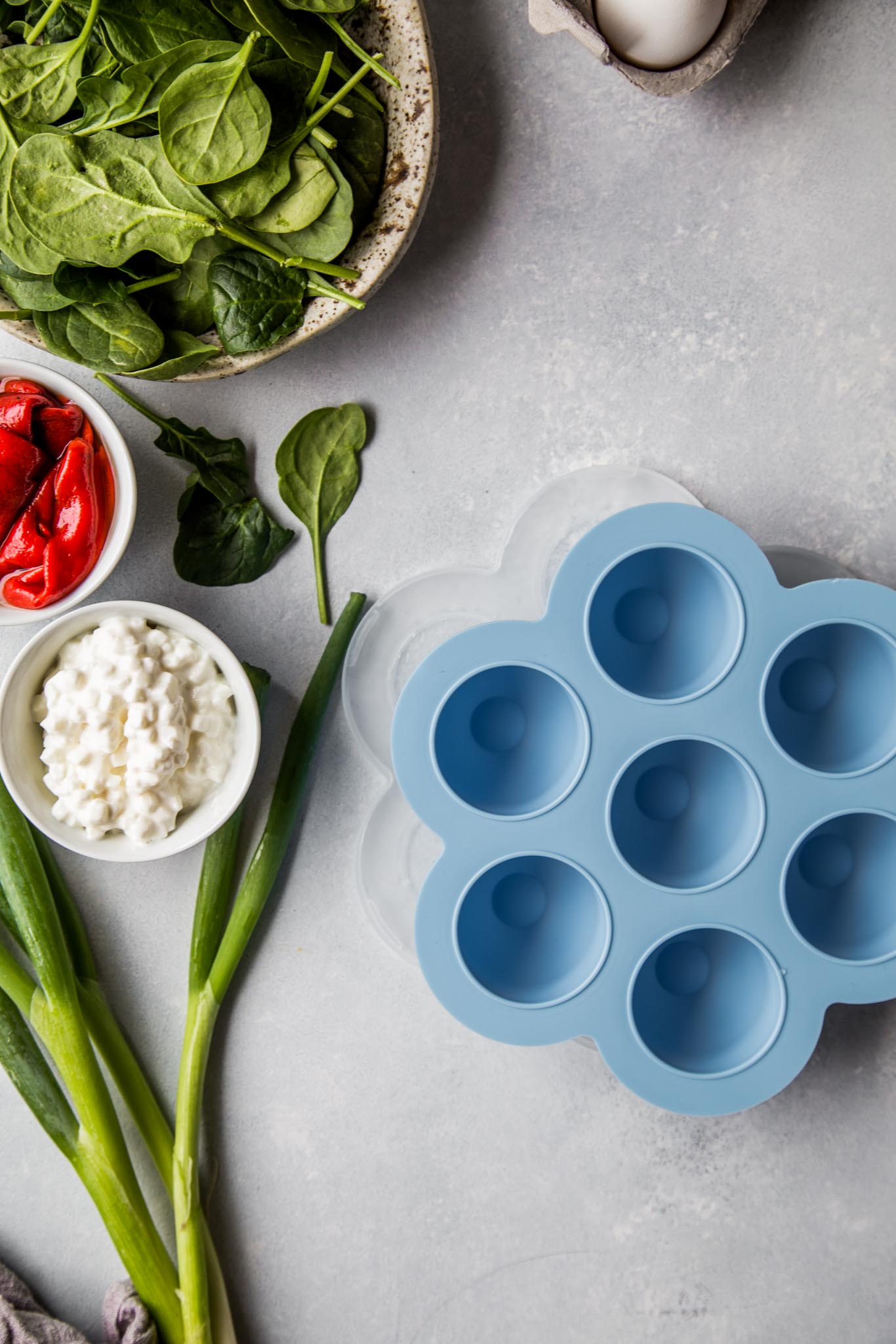 There are so many recipes out there for sous vide egg bites, and it took me a while to get these Instant Pot Sous Vide Egg Bites just the way I wanted. But today, I can honestly say that I’ve perfected the recipe for egg bites that are light and fluffy (not overly dense), light on the calories, and perfectly flavorful.

When I first started recipe testing, I used a much higher cheese to egg ratio – 1 ½ cups of shredded cheese for every 4 eggs. I found that ratio to be way too high, resulting in egg bites that were super dense, not light and airy like I was hoping for. So, I ended up cutting the amount of cheese way back – using only ½ cup of shredded cheese and ½ cup of cottage cheese for every 4 eggs. This ratio was absolutely perfect, resulting in a egg bite that was light and delicious.

At first, I thought about just using the egg whites for this recipe, to cut down a bit on cholesterol and calories, but I decided just to use the whole egg because I hate wasting the yolks, and, in reality, you’re eating less than one egg with each of these sous vide egg bites. The calorie count for these Instant Pot Egg Bites comes in at just 82 calories per bite, which I think is more than reasonable for a delicious, protein packed treat.

And then came my add-ins. I wanted to stick to a version that was similar to the original Egg White & Red Pepper Starbucks sous vide egg bites, so I kept things simple – Using monterey jack cheese, roasted red pepper, green onions and a handful of spinach for some added nutrition. On my first attempt, I blended up the eggs with the cheeses and then stirred in my add-ins. After cooking, the veggies all seemed to creep up towards the top of the egg bites. But on my second attempt, I decided to give the add-ins a quick pulse in the blender. This seemed to make them much more universal in texture and the flavors were evenly dispersed throughout the bites.

Take note that you’ll need at least a 6-quart Instant Pot to make these Instant Pot Sous Vide Egg Bites. That’s the size I have at home, and I found that the silicone egg bite mold fit perfectly inside, it was even a bit of a tight squeeze and I needed to lower it down onto the steamer rack using just my fingertips. If the Instant Pot were any smaller, I don’t think this mold would work. Be sure to cover your mold with aluminum foil or with one of these silicone lids.

Setting the Instant Pot to STEAM for 10 minutes resulted in egg bites that were perfectly cooked. Note that it will take about 5 minutes for the pressure to build, and then the countdown timer will begin. After the time is up, I let the pressure release naturally for 10 minutes before removing the egg bites from the Instant Pot. So, you’re looking at just under a half hour from start to finish for this recipe. 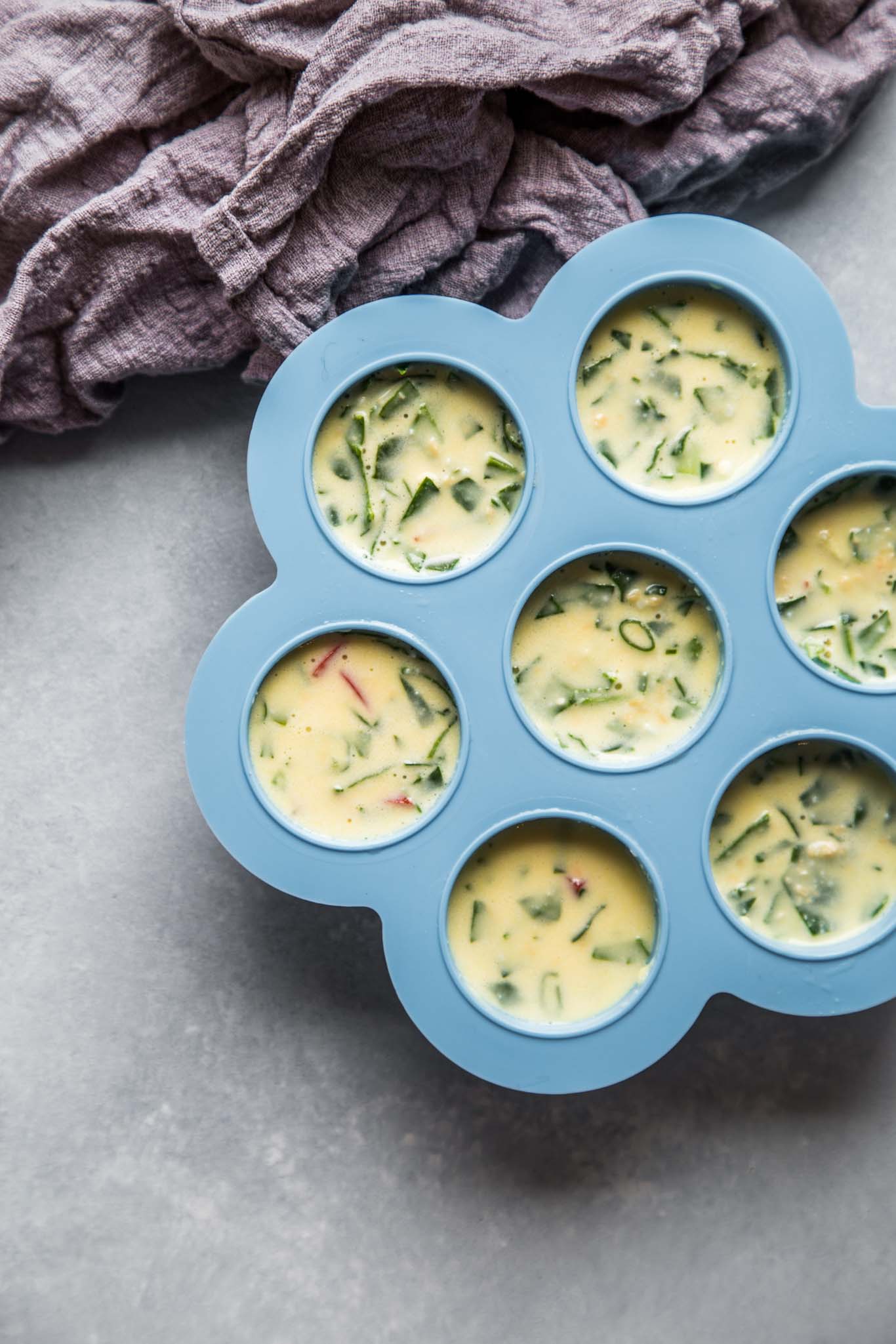 The best part about these Instant Pot Sous Vide Egg Bites is that they’re totally customizable. 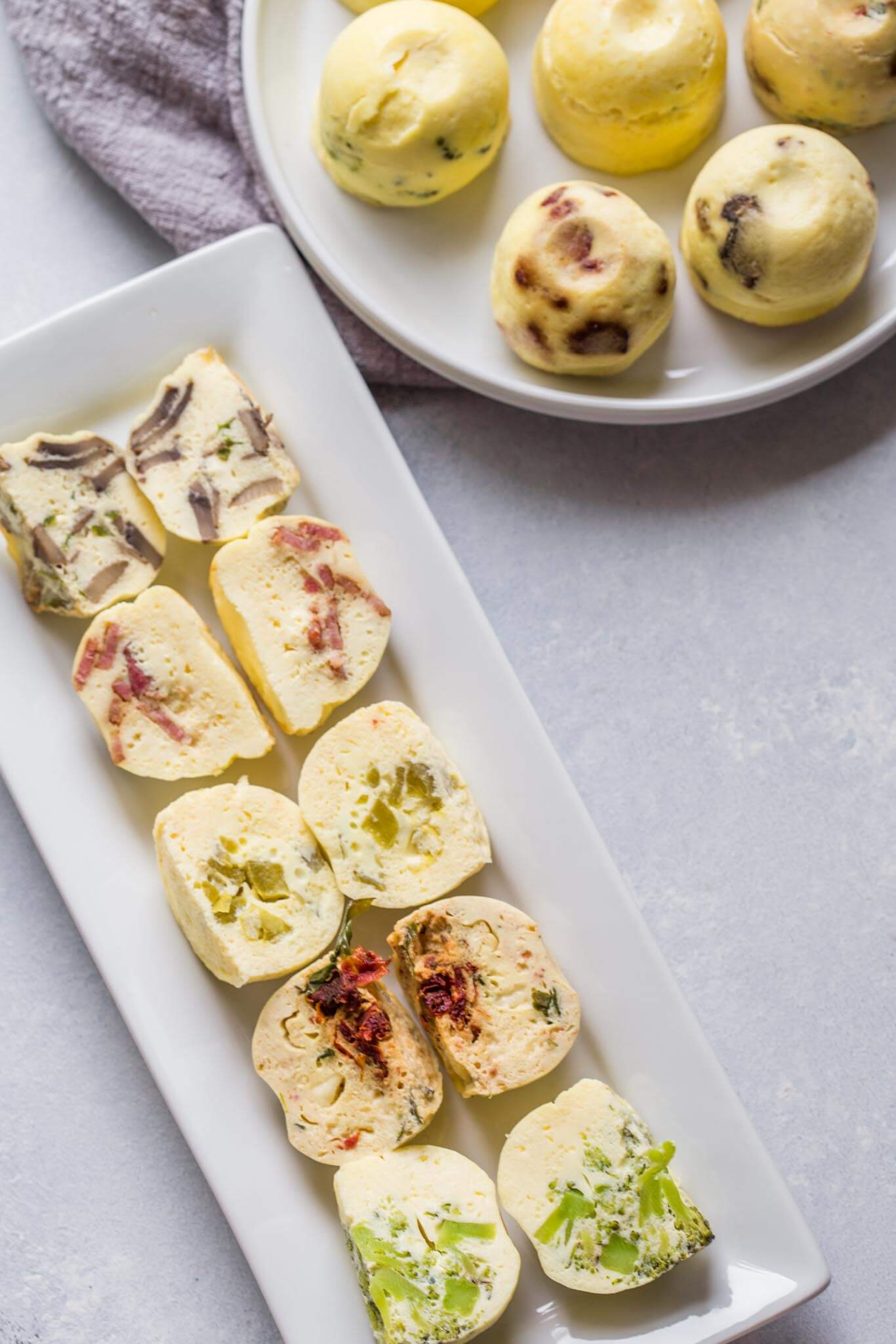 I like to make a batch of these on Sunday so that I can have them on hand for quick breakfasts during the week. I’ll just pop the egg bites out of the silicone mold and pack them up in a ziploc bag. Then, when I’m feeling hungry, they just need a quick 30-seconds in the microwave. You can also freeze your Instant Pot Sous Vide Egg Bites. If frozen, they’ll take about 1 ½ – 2 minutes in the microwave. 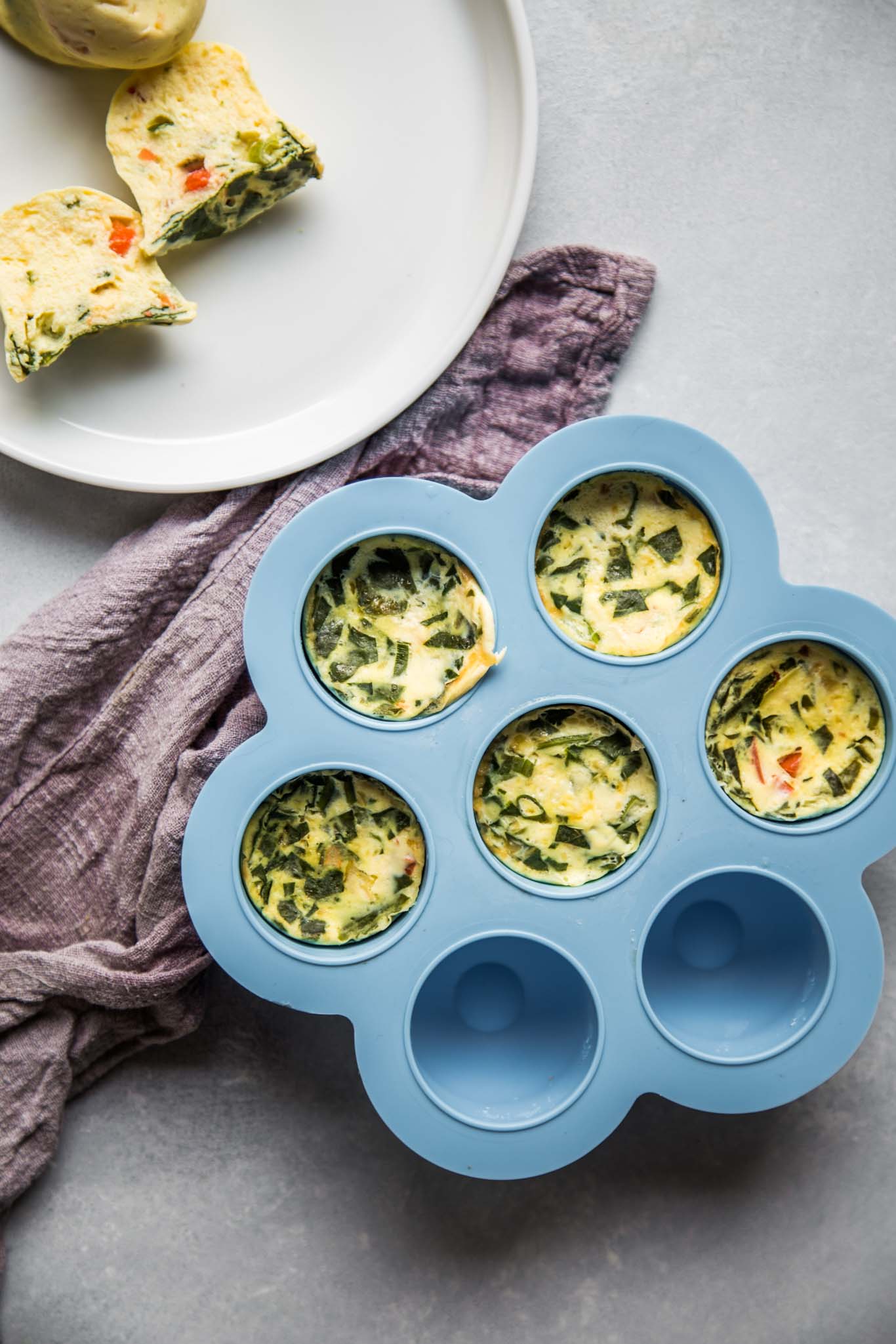 How would you customize your Instant Pot Sous Vide Egg Bites? I’d love to hear your favorite combination in the comments below!

If you loved these Instant Pot Egg Bites I would appreciate it so much if you would give this recipe a star review! Also, be sure to snap a picture of your finished egg bites and share it with me on Instagram using the hashtag #platingsandpairings and tagging me @platingsandpairings. 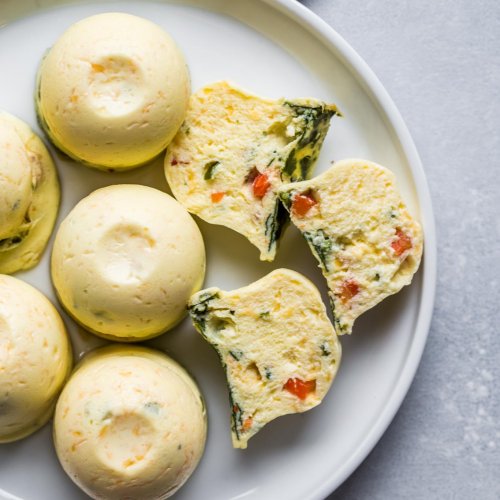 These Instant Pot Sous Vide Egg Bites are just like the ones you’d find at Starbucks. By making them at home in your electric pressure cooker, you’ll save lots of money and you can totally customize them with your favorite flavors.
4.35 from 544 votes
Print Pin
Prep Time: 5 minutes
Cook Time: 10 minutes
Time for pressure to build and release: 15 minutes
Total Time: 15 minutes
Servings: 7 servings
Created by Platings and Pairings